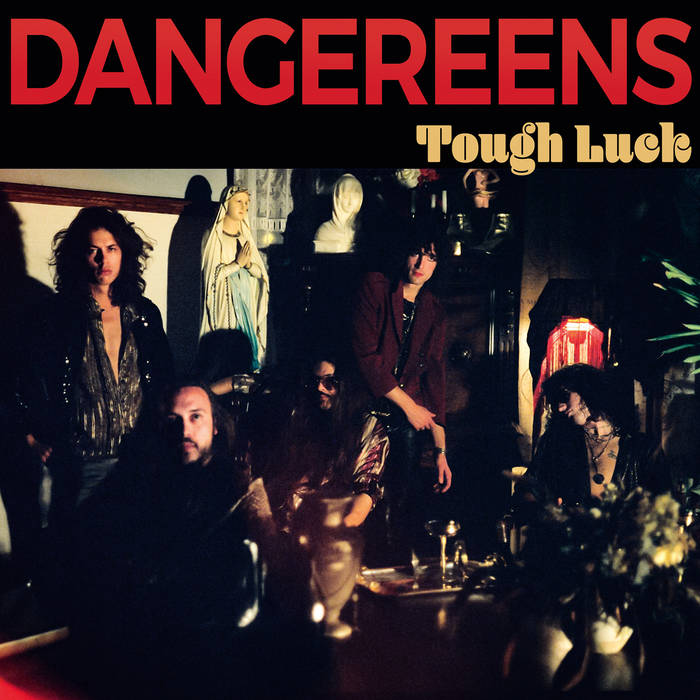 Strutter Magazine (NL) NOV 2020 Out of Montreal, Canada comes DANGEREENS and their debut album Tough luck sounds like we went back to the early 1970s when Rock and Roll was about combining elements of Glamrock, Honky-Tonk Boogie Rock, Blues, 70s Hardrock, Garage Rock and a tiny bit of Southern Rock (Love jive) into an exciting uptempo rocking style. Nowadays this kind of underground mixture of rockstyles is mostly in the underground movement possible, but DANGEREENS could easily score a hit with one of their 12 songs that can be found on the beautiful looking vinyl record I received. They are a bunch of young musicians whose fathers were probably not even born around 1973! Nevertheless, DANGEREENS sound like we're almost 50 years back in time and they do it really well, coming with a full blown record of potential classic rocksongs in the future. It's a pity they can't perform live right now, because I am sure they will go down very well! The line-up consists of Hugo Chartrand - Vocals, rhythm guitar, Felix Brisson - Lead guitar, backup vocals, Myles Morin - Bass, backup vocals and Yanick Berthiaume - Drums, piano, organ, percussion, backup vocals. Capturing the sound of early/mid 1970s Rock and Roll is quite hard, because this is the time between British Glamrock and 1977 Punkrock, where there was quite some improvisations and experimenting with all kinds of past rockstyles. The result is usually sounding like a harder edged version of ROLLING STONES, and that's what DANGEREENS is also doing here, but they sound so authentic, it's like we are really back in the year 1973! The best songs on the album are Thieves (uptempo classic early to mid 1970s Glamrock a la THE NEW YORK DOLLS and HANOI ROCKS, with a bit of Rock and Roll a la HERMAN BROOD & HIS WILD ROMANCE), Microwave boogie (uptempo slightly more melodic rocking piece, like THE SMALL FACES meets a tiny bit of BRUCE SPRINGSTEEN), the superb Twelve below zero (an almost Powerpop ish tune with catchy melodies), Worried mind (punky uptempo Garage Rock like THE BOYS could have sounded a few years later and in fact they did when one of their members was in a band called THE HOLLYWOOD BRATS) and the sensational soul injected Powerpop/Garage-rocker Nomadic step (like IGGY POP doing a song together with JOE JACKSON and JOOLS HOLLAND). DANGEREENS are a band to watch out for in the future, because after the pandemic, this is one of those bands that live will get your head rocking for sure during a gig or festival performance. In the meantime check out their fantastic soon-to-become classic rockalbum! (8.6/10)

Classic Rock Magazine (UK) Oct 2020 DANGEREENS: A PERFECT ROCK'N'ROLL RECORD - Montreal's premier glam-slammers return with another dose of classic honky-tonkin', blouse-wearing, foot-stomping late-night action. Influences and inspirations are fairly simple and thoroughly classic - Stones, T.Rex, Kiss, Thin Lizzy, Hanoi Rocks, The Kinks, you get the drill pretty quick - but it's all in the delivery. Dangereens swivel their hips and wet their lips with such effortless style that it's kinda jaw-dropping, really. They sound like they were fucking born playing Chuck Berry riffs and wrapping scarves around their mic stands. The songwriting chops are on full glorious display as well, with easy-driving jivers like Hearse Driving Blonde and Booboo perfectly complimenting full-on Dolls-y stompers like Streets Of Doom and 1003. If rock'n'roll's glory days are behind us, nobody told these dudes. Or if they did they just laughed in their face and ripped out another majestic solo. This one is it, man. Album of the year, if you're the type who actually knows what's up. For all intents and purposes it's a perfect rock'n'roll record. 9/10

RAZORCAKE.ORG #119 (USA) Nov 2020 We've got wonderful, swingin' rock'n'roll from Montreal here. Plenty of New York Dolls influence, but I suspect there's a grip of other more obscure, similarly styled 70's rock'n'roll groups lending inspiration to this throwback slab o' wax. Catchy songs, lots of piano, warm production, and even a little saxophone (which shockingly didn't make me want to frisbee this thing into the street like nearly every other record ever with sax usage). If anything, it's almost too well done and not wild enough. I'd like to hear the singer let loose and the guitarist go a little off the rails. Minor complaints though. Play this record loud if you dig Giuda, Diamond Dogs, Thunders, Joneses, Bowie, Faces, et al. (CW)

loudersound.com (UK) OCT 2020 Anyone seeking a giddy, carefree reminder of the good old days (if by the good old days you mean 1973 with the New York Dolls, T.Rex and the Stones on heavy rotation) could do a hell of a lot worse than to check out this track from these Canadian renegade boogie maestros. Glam, distorted and sugared enough to be mega-catchy (but spiky enough to avoid actual nausea), Streets Of Doom is a frenetic, glitter-booted burst of decadence, dancing and dirt - all raw Duracell bunny guitars and louche vocals. They describe themselves as "The most elegantly decadent RNR unit of the 21st century", which sounds about right to us.

maximumrocknroll.com (US) July 2020 Jingly jangly piano! Jingly jangly guitar! Jingly jangly trumpet and sax! This is some sharp and full-bodied rock and/or roll from Montreal, which seems to have a never-ending supply of great art seeping out from it. This is the kind of rock that you may initially be struck with the inclination to say “Hey! They’re ripping off…” and then realize you can’t actually pick the band. It sounds familiar, but that’s because this collection of musicians is just that good. There’s some glam, some garage, some power pop, and a whole lot of frantic energy. The first line of the album is “Here I am,” and from that point on, you’ll feel like you’re on a musical journey with a very showy guide. Check out “Streets of Doom,” for a foot-tappin’, booty shakin’ sampler of the glory. (RH)

fasterandlouderblog.blogspot.com (USA) June 2020 Well here we've got another great release from Alien Snatch Records. And you know I wouldn't have expected anything less! Dangereens hail from Montreal and have kind of a different sound for Alien Snatch. Hell, they've got kind of a different sound, period! And that's what I'm especially digging about this group. You can't quite put Dangereens into any obvious category. At first listen, you think maybe they're into the sleazy glam rock thing. But over the course of their debut album Tough Luck, they touch on everything from rhythm & blues to '70s jam rock to boogie woogie to rockabilly. When was the last time I compared a band to Mungo Jerry? "Streets of Doom" makes me think of Eternally Yours era Saints, but not quite. "Hearse Driving Boogie" channels Dave Edmunds via The Replacements. "Twelve Below Zero" sounds a little like a lost deep cut from The Kinks. You could slot "Love Jive" into any oldies station's nightly '70s block and fool almost everyone into thinking it was genuine AM gold. "(Bye Bye) Little Uptown Girl" is a an R & B rocker as righteous and rousing as anything the J. Geils Band ever did. I'm not always a fan of piano, sax, and trumpets in rock and roll. But holy cow, does this band ever pull it off! Hugo Chartrand has got legit star presence on vocals, and Felix Brisson on lead guitar can play like a motherfucker! Dangereens describe themselves as "elegantly decadent rock and roll". That could not be more spot-on! The musicianship and production on this record are about as professional as it gets. But first and foremost, Chartrand writes appealing songs that are well-suited to the effortless cool he exudes as a performer. If you favor more straight-forward glam rock, I recommend the band's new single "Lucky In Love". But I think the full album really gives you the best feel for what makes Dangereens a special band. Has anyone noticed that three of the last four Alien Snatch releases were by Canadian bands? Daniel knows what's up. (JR)

greennoiserecords.com (US) July 2020 The dirty sweet sounds of Dangereens, the latest long-player from Canada's "most eleganlty decadent RNR unit of the 21st century," a barrel of barroom R&B spiked with shot of champagne and a mason jar of hillbilly mountain dew, the 1950s (Chuck, Bo, Little Richard and the Everly Brothers) shot through the heart of 1960s and 1970s (Kinks, the Stones, the Saints, the Box Tops, Stiff Records, T. Rex, Allman Brothers, Free, Rory Gallagher, the Faces) and coming out the other side as its own brew of rock 'n roll (and helping reveal where it all came from--the juke joints of places like Atlanta, Louisiana, Memphis and Texas to the dive bars of the Detroit, St. Louis, Kansas City, Chicago, Pittsburgh, Boston and L.A., anywhere the great tree of the Great Migrations injected the city with Black Music (mw)