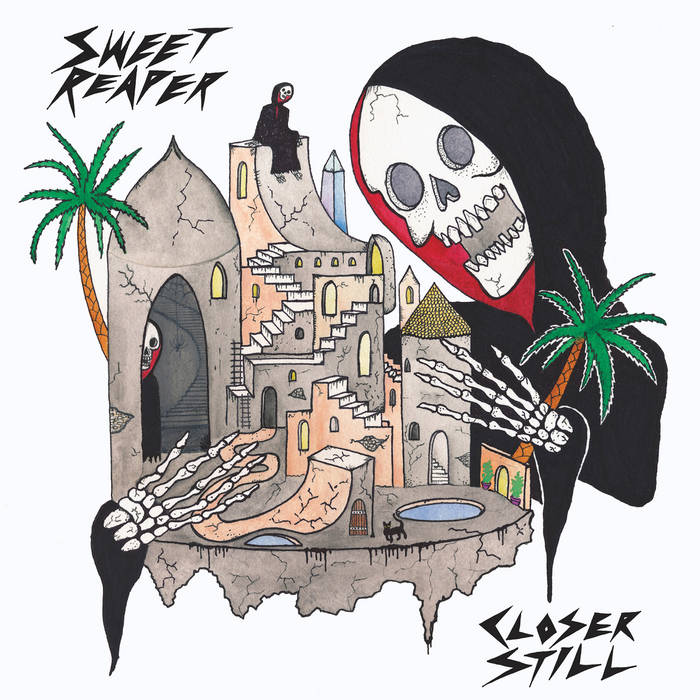 Andrew O This song is so good. I had to pull out my guitar and learn to play it. Favorite track: Car Crash.

ian1984 I see gods in the nebulae. Is there something wrong with me?

hertlocker Love this record! Has that Burke sound that I dig. Alien Snatch! is great at finding and distributing to the ears of the people.

fungicide This is my favorite lp of 2020. Just perfect. Favorite track: Car Crash.

maximumrocknroll.com (US) Nov 2020 OK, this band got me trying to remember a Swedish pop band I used to listen to, it took me like a damn hour to think of… CAESAR’S PALACE, specifically the album Cherry Kicks. Ventura, CA’s SWEET REAPER presents way more punk in both production and songwriting, but it’s got a similar vocal delivery. A more relatable touchstone could be MARKED MEN, or I even dare to stretch it to HEX DISPENSERS. Don’t get too settled with my predictable Tex-ass comparisons though, because there’s a heap of California beach punk here, as per their proximity to the Pacific Ocean. Each pop vocal hook is sharpened deadly and cast through the cheek of any dumb punk willing to nibble. The drummer does that kick-drum-on-all-four-beats thing, topped with sixteenth-note hi-hats, it’s the ultimate thing to tip a band into danceable territory. A nice surprise! Who else hates the label name “ALIEN SNATCH!”? (MB)

RAZORCAKE.COM #118 (US) OCT 2020 In the fall of 2014 a handful of skaters who called themselves The Great Skate Boys embarked on a skate expedition from Seattle to Tijuana with the sole goal of drinking some margaritas once they reached their destination. When I listen to SWEET REAPER I envision panning shots of these American heroes bombig hills down the back roads of the Western states. Determined and inspired by goals outside of the rigid, hypothetical stepladder of "success", SWEET REAPER play California garage pop for the post-trend set. A lifelong dedication to something never felt so easy and enjoyable to listen to. Let this record guide you to the backyard BBQ deep down in your heart, the flickering bonfire warming your soul and lifting your spirits.The world may be circling the drain but SWEET REAPER is catching the wake and fliping the bird to the goons who got us into this mess, 'Tura punx win again!

BEATINMYBONES.COM (UK) OCT 2020 About 6 months after it was released, I’m finally going to write about the new Sweet Reaper record. I thought I already had, but clearly not. Besides, it’s meant I have been listening to it non stop the past few days and by no means is that a terrible thing. Sweet Reaper makes that good stuff. That real gnarly Garage Rock music that hits you in the soul. The kind of music that makes you feel less alone with feeling lonely and a bit useless. There’s something about that fuzzy guitar and powerful vocals that just hit you, and the drums are like euphoric crashes to the soul. It’s a fantastic record, and to be honest, it just reinforces my love for them. Closer Still is just a feel good record, and you cannot help but forget your trouble for that half hour or so as you listen to these blistering songs. Again, it is another record you wish you could see being performed live, but the universe is on it’s arse at the moment and we can’t do shit. I hope when this all ends Sweet Reaper make their way to the UK and blow us all away with their brilliance. There’s only 3 of them in the band, but don’t let that for a second make you think they are tame and are afraid to be loud. Far from it! This trio knows exactly how to deafen the listener in the most pleasing way possible. Don’t believe me? Play Car Crash loud through headphone, and you’ll understand. Dead Man is the song you can imagine the crowd pogoing to so furiously and probably causing damage to their bodies- but why do we care?! It’s all part of the fun. And fun is one of the many things that this glorious record is. The record has 11 songs to just blow you away, and aside from that, you cannot help but be in awe of the slick production on this record. It’s got that strong DIY/lo-fi feel, and this is one of the many things that makes this such an incredible record. Is it their best work so far? Damn right it is. You can really hear something different on this record, and it’s on songs like Faster Getaway and Sidewalk Psycho. The latter being one of the really loud moments on the record. They aren’t afraid to mellow out on some songs, just like they don’t shy away from being brutally loud on some of the songs. It’s such a strong record, and if you’ve been obsessed with it for the past 6 months- you’ll get exactly why. You just wish you could crawl deep into the safety net of this record, and let it shield you from the shit that’s going on. But, that’s why one of the most freeing things we can do is play music loud in our homes and just shut the world out for a bit. Same Nightmare is one of my favourites at the moment but given I’ve had nearly 6 months to really soak up this record- I do change my mind a lot. I’ve got a lot of time for this song; there’s something about the lyrics and the whole creation of this song that just sticks with me. You can go between playing the record in order or putting it on shuffle, or whatever. Every song sounds perfect regardless of the order you listen to it, and for me that’s what makes it such a standout record. Of course it’s best to listen in order, then allow yourself to just let it play however you want. It just works. If the order of the record meant that Sad Eyes was the opener rather than Sidewalk Psycho, the record would still have this same feel. I guess that’s what makes it correct in calling this a perfect record. Every single song deserves its place, and is such a joy to listen to. As long as we have bands like Sweet Reaper, maybe, just maybe- we’ll be alright.

greennoiserecords.com (US) July 2020 Speaking of 1-2-3, that's what we got going on here, the brand new debut album from SWEET REAPER of California, the moniker of this band letting you know what you can expect, dark chocolate, punk rock menace with the punch of fast power pop, in love but pretty pissed off about it, "God damn it, you're the one I need..I'm a car crash, baby," it's all fun and dark, almost funny, serious fun, intentional and focused, spontaneous and real, a hard ball of rhythm, lyrics almost like Sabbath without the wizards and the metal music, punk rock busting out of the muck instead of stuck in it, or at least trying damn hard to get out of the tar pit of life, essential grab for all you fans of Dirtnap or probably most anyone reading this, one of the great albums of the summer of 2020. This is the shit, I shit you not. (mw)

fasterandlouderblog.blogspot.com (USA) July 2020 t seems like every time I turn around, Alien Snatch Records has released something new and awesome! Closer Still is the vinyl debut from Ventura, California trio Sweet Reaper. What we have here are 11 tracks of fuzzy garage pop that would be equally at home on the beach or at the cemetery. On the continuum of all things Alien Snatch, this band slides neatly between Radioactivity and the Hex Dispensers. Think catchy, lo-fi tunes that manage to be really upbeat and a little haunting at the same time. Sweet Reaper originated as the album Sweet Reaper by Seth Pettersen in 2015. That solo project soon turned into a proper band, and Closer Still is the second of the group's two full-length releases. It sounds like something that Dirtnap Records might have put out circa 2003, but with a little more of that modern-day Southern California flavor. You can call this a party record, but only if you're comfortable partying at a haunted house on the beach. Actually that sounds kind of awesome. Red vinyl is limited to 100 copies - you know what to do! (JR)