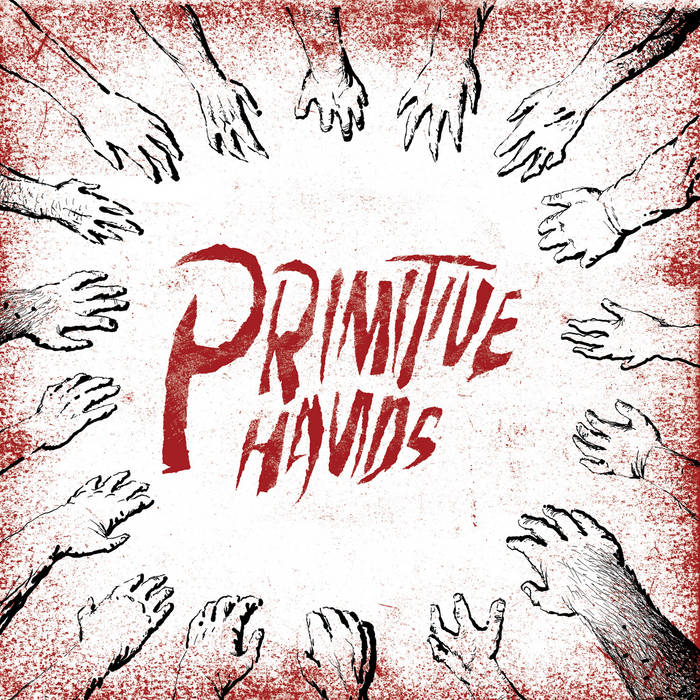 razorcake.org (USA) #106 OCT 2018 Blown-speaker garage rock from Canada. There’s a touch of early ’80s SoCal punk in there, too, a la Night Birds. These two guys manage to be catchy and to go hard. It’s not every day you get both, so snap this one up if your favorite part of a skate video is the slams section. (CT)

marklosingtoday.wordpress.com SUNDAY EXPERIENCE (UK) OCT 2017 This wonderful slab of raucous racket is out about now through the esteemed Alien Snatch imprint, by Primitive Hands and ripped from a self titled debut full length this is the garage punk-a-hula grooved ‘summer school’, a razor sharp up close and personal 79 second pogoing feral scuffed n’ scuzzed boogie is how you’d best describe it, the kind of coolly impacting day glo damage that the likes of Estrus used to run out with ridiculous frequency back in the day

aliensnatch.de It´s Brian Hildebrand (Demon's Claws, MIND CONTROLS, Genital Hospital) from Montreal, Canada. Running since 2009 he did three, quite limited 45s we love to death. Now Mathieu Blackburn joined for a rage of a punk album. The piece of vinyl is sheer lo-fi KBD madness and has eleven bone-crushers, including cover versions of THE MAD and RED SQUARES. For years, "They Want My Blood" was our favorite unreleased track. We can´t believe it´s finally out on ALIEN SNATCH! wax now! Strictly limited to 500 vinyl only copies with 380 on black vinyl plus 70 red vinly and 50 gold vinyl, these colored raw 45rpm chainsaws are mailorder only. Artwork by Darren Merinuk, the King.