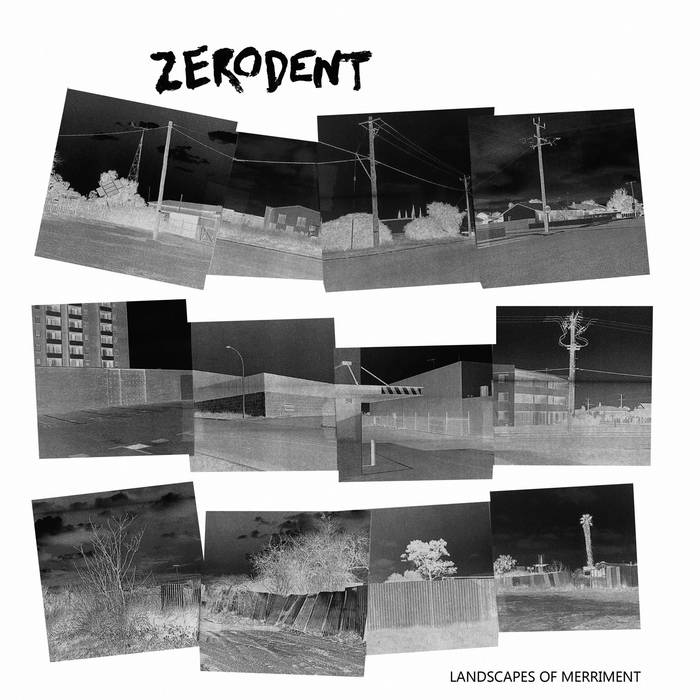 ALIENSNATCH.COM (GER) Apocalyptic reign of bash´n´pop! Second album by this Perth, OZ outfit after their self-titled debut on ALIEN SNATCH! in 2016. In the meantime, they had a US-Tour with appearances at GONER FEST 13 and a Live at WFMU-set and a follow-up 7" on ALMOST READY. On "Landscapes of Merriment" you get loads of mid-tempo-crushers, solid as rock Australian punk. Typical ZERODENT is WARSAW-WIRE-sque dystopia piercing blue-collar British punk simplification. This is cliché-free, skipping phases of adolescence minimalistic songwriting. We´re more than proud to present this album from a living band and not from "lost recordings" or a reissue from ´76 and kick-off an European Tour in 2019. Songs to climb walls, rip fences and bullwhip the agendas. Check the deadly serious video of "Stay In" on your devices! Skate through Landscapes of Merriment and inhale the dust.

MAMIXIMUMROCKNROLL.COM (US) Double the pleasure with ZERODENT’s second LP. Perth’s most remote punks channel some canonical punk sounds here (and always), taking a fairly cold post-punk approach up front, but heating things a bit with an early ’80s UK punk bite. A very measured offering, but it’s got enough brains to catapult it past mere case study. Less than 300 copies worldwide, so move quickly and with purpose. (MC)

DUSTEDMAGAZINE.COM (US) OCT 2018 Zerodent, a punk rock outfit out of Perth, Australia, returns with a faster, louder and more fleshed out follow-up to its 2016 debut. The band picked up a new rhythm section in the interim, adding Clinton Bell and Dylan Prosser, which may account for increase in density. The core duo of Predrag Delibasich and Lee Jenkins remain, slashing strings and barking mad poetry, in a thrashing, slamming, stinging continuum between Wire-ish post-punk and Clash-like clangor. Landscapes of Merriment is Zerodent’s best so far, and that’s saying something. I first caught up with Zerodent during our first Bandcamp feature (we’re working on another now), and observed of the Soulmender EP that “the temptation is to compare them to blunt and basic outfits like Eddy Current Suppression Ring, the punch and hook of these three cuts links them back to angry, funny, tuneful British punk like the Buzzcocks and Half Man Half Biscuit.” Landscapes explores rougher territories, still tuneful but more bruising. The recoil from these guitar licks kicks like machine gun butts. You can get a long way on a riff and some adrenaline in this sort of music, but Zerodent goes beyond that with actual hooks and even, sometimes, melody, though often expressed through the instruments rather than Jenkins spoke-sung, workingman’s rants. The double-timed drumming and ringing guitar chords of “Stay In,” recall the sweat-soaked anthemry of the Marked Men. There’s a song in there, even if it’s hammered to pieces by aggression, and you can hear it in your head when it’s over. “Perpetual Obligation” has the same kind of melodic heft, a tune that gives shape to its rattling, battering assault. Even the super-jacked, close to hard-core “It Was Never Meant to Be,” buries a hook in its juddering onslaught, and good luck trying to get it out once lodged. This is not to minimize the sheer, onrushing exultation of a punk band on its game, punching out violent tumults of guitar, bass, drums and shouts. Zerodent does that really well. But when you come out, covered with lacerations, spilled beer and anomie, you have a song in your head, too. Score. (JK)