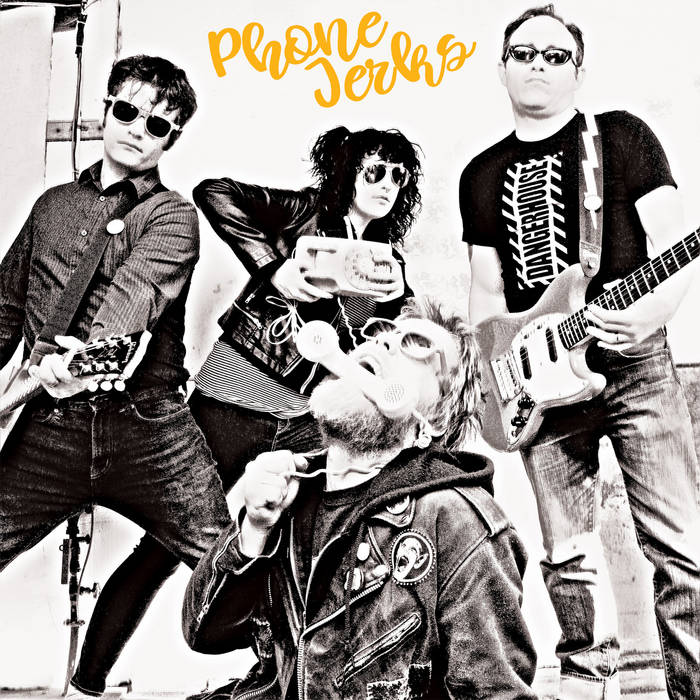 miss emvy I bought the vinyl in person after a show last year and had it signed by the band. They're all amazing! The guitarist, Tyler, had some great moves, jumping around the stage and wind-milling. The songs are short, fast, and raw, packing a lot of punch, and making them great to jump around to. I love the lo-fi sound of the vocals, too, regardless of who's at the mic, which is another fun thing about the band: everyone gets a turn :p Favorite track: Ghost Idiot.

K.R.K. Loud, fast, unashamedly garage punk in the vein of Teengenerate or the Oblivians? Hell yes! Honestly, you had me at "loud." This brings the no-BS three-chord mayhem you crave, and does so with berserk enthusiasm and loads of heart. Favorite track: Not Listening.

poikkeus Modern garage punk with lo-fi vocals that recalls Teengenerate - with fast tuneage and an edge of distortion on the edges. Phone Jerks have a killer sound, but this LP pulls it all together on one package. Excellent! Favorite track: Bitchhiker.

MAMIXIMUMROCKNROLL.COM "Goddamn, this thing is delivered with a sense of urgency that I find infectious. Imagine bands like the RIP OFFS and TEENGENERATE. Everything about this is intense: the pace, the vocals, the lyrics, the guitar, the drums, the bass...I said “everything,” didn’t I? Did I stutter? I can’t wait to get my own copy. Excellent. (KK)

ALIENSNATCH.COM PHONE JERKS are a foursome from Moncton, New Brunswick. This is raw crab-shrapnel-Canada! Three dudes and Emily on drums, all on lead vocals means technically a dial-up connection from the ice speedway smash up derby to budget rock heaven. If you remember BRENTWOODS and LOLI & CHONES you´re should bet on her, the boys crank it more in a wired METROS way to winter dance party SPACESHITS with some euro teen degenrate REAL LOSERS spikes. Yes, this reference list from the all late 90´s to millenium band league which did NOT suck. You need to look very close today to find this shower of frequencies, blown-out fidelity lo-fi rock combined with flying-ice-cream-cups-fun. Take RADIOACTIVITY, SICK THOUGHTS, REATARDS and TOTAL PUNK pilgrims, with more buckets of simple & stupid party collusion and you be catapulted back to the bands above you may have not grown-up by then. It´s lo-fi garage punk! You´re lost in a infinite time-loop! PHONE JERKS had 2017 a 45 "Can´t Stand the Maritimes" on GOODBYE BOOZY (the Italian who never did anything else in life expect what he does best) which sold out quick, but pheew, the album blows the single away. Recorded by Dave Belliveau (DISASTERBATERS) nad mixed & mastered by James O'Toole of OUTTACONTROLLER - it´s so good you don´t need to fake orgasms here. Ripping covers of "Violence, Anarchy, Baby, Mother, Daddy-O, Dig" by DA SLYME and "Revolution" by X. We are writing 2018 and we started 1998, this is the blueprint and the easiest shooting-fish-in-the barrel of an autobiographical ALIEN SNATCH! release. We would have released this PHONE JERKS LP any year of out label history, but where have they been the last twenty years? If Greg Lowery would run RIP OFF Records instead of real estates, this would be his condo of choice! Their power pop origin and band name phone schtick is highly reminiscent to ring-ring BUSY SIGNALS to MARK SULTAN´s BBQ taking a message to hang BLONDIE after the beep. Get this record and reaffirm your life choices! Cruise to lose!

fasterandlouderblog.blogspot.com (USA) Sep 2018 WHAT?! Phone Jerks have released an album? On Alien Snatch Records?! One of my favorite bands put out a record on one of my all-time favorite labels, and nobody knew anything about it until a week ago?! Now that was a fiercely-guarded secret! Respect! Alien Snatch Records has been setting the standard for what a punk rock label ought to be for 20 years now. From assembling a roster including the likes of the Kidnappers, Real Losers, Fevers, Yum Yums, Minds, and Leg Hounds in its early 2000s heyday to releasing brilliant music by current-day bands such as Freak Genes and The #1s, Alien Snatch has remained a go-to for any fan of garage-punk and power pop. Moncton, New Brunswick's mighty Phone Jerks could not be a more fitting addition to the Alien Snatch family. Their debut LP hearkens back to countless beloved garage-punk LPs of the '90s and early 2000s. And I gotta tell you the thing is absolutely KILLER! Upon hearing "Nothing There", you just might find yourself convinced that The Rip Offs have gotten back together! Alien Snatch honcho Daniel has astutely pointed out that he could have released this album in any year of the label's history. These tunes are that timeless. Of course Phone Jerks sound like a band that could have been peers with Loli and the Chones, The Metros, Teengenerate, etc. Yet they also align perfectly with modern-day greats like Gino & The Goons and Sick Thoughts. This, my friends, is garage-punk the way it ought to be: trashy, lo-fi, and intentionally devoid of originality. Why are there not more bands like this in 2018?! Being four upstanding Canadians who value your hard-earned dollar, Phone Jerks have delivered almost entirely brand-new material for this debut album (along with covers of "Revolution" by Australia's X and "Violence, Anarchy, Baby, Mother, Daddy-O, Dig" by Newfoundland punk legends Da Slyme). No tracks from the Goodbye Boozy 7" have been repeated, and only two songs re-appear from the band's demo tape. The instant you dig into "Bitchiker", you will find yourself fondly recalling a time when every new Rip Off Records release was an event worth celebrating. And come on: how can an album that begins with a song about killing someone not be the best record of the year?! These songs are all so ripping and catchy and tremendously fun to listen to. This is an album that you just have to crank super loud. And half the fun of this record is going through it track by track and asking, "Who are they ripping off here?"! The fact that Phone Jerks have three different lead singers makes it all that much cooler. Emily, Tyler, and Brian each bring something unique to the table (and you know, they all seem intent on smashing that table). The production (kudos Dave Belliveau and James O'Toole!) is spot-on for what budget rock ought to be. You know how modern-day reviewers are so fond of using "crackling" as an adjective? This album is crackling. Literally. So why aren't there more bands like Phone Jerks in 2018? I don't know, but maybe there will be after their debut album makes the rounds! Canada is ahead of the curve as always (especially in Moncton, where they observe the Atlantic Time Zone). With me poised to name an Alien Snatch release album of the year, it sure feels like old times! (JR)